Eggs are cheaper now, Parliament told ... but at what price?

PETALING JAYA: Malaysia wants to ramp up efforts to boost padi production so that the country will be more self-sufficient and ready to face situations that may affect the supply of the staple grain.

He said Malaysia would revisit the 70:30 policy that determined the amount of rice it imports.

“We have been comfortable with producing 70% of our rice needs and importing 30% of it for a while but with our borders closed because of Covid-19, we faced some obstacles in our rice imports.

“Because of this, we see a need to boost padi production on a larger scale. So, we will revisit the 70:30 policy and see how we can provide at least 75% of the country’s needs ourselves in years to come to reduce our dependency on imports, ” he said.

In order to increase the country’s rice yields, he said Malaysia would have to look into enhancing production in existing padi fields, identifying the right fertilisers and rice varieties to use, examining the irrigation systems and conducting soil profiling.

He said the ministry had already set aside funds to conduct soil profiling to set up a systematic plan to fertilise such plots in hopes of boosting padi production.

Kiandee said this was done on top of efforts to mechanise and automate the sector, adding that Malaysia had the potential to improve its rice production capabilities.

“We may not have big land areas like Vietnam or Thailand but in terms of yield production, we are higher, ” he said.

Out of that amount, he said RM3.28bil had been set aside for operating expenditure, where about RM1.7bil would be used for incentives and subsidies to assist farmers and fishermen.

Such initiatives and aid assistance were aimed at strengthening the country’s competitiveness in padi production as well as easing the burden of farmers and fishermen, he said.

He added that RM960mil had also been set aside to subsidise and incentivise rice production and that RM40mil had been allocated for subsidies assistance for hill rice fertilisers.

“This is a new form of subsidy for hill rice farmers and could be beneficial to about 3,000 rice farmers, ” he said.

Separately, Kiandee said the Cabinet Committee on Food Security had also decided to establish a National Ruminant Council to lessen the country’s dependency on imported meat.

He said about RM100mil had been allocated under Budget 2021 to assist high-impact and high-value agriculture and farming projects which include the ruminant industry but the government could not do it alone.

“We will require participation and support from the private sector to help boost our meat production.

“The ministry can help by drafting policies that will enable the development of this sector but the private sector needs to invest to help enhance the country’s meat production, ” he said, adding that the country imported about 76% of its meat requirements. 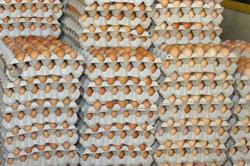 Eggs are cheaper now, Parliament told ... but at what price?