KUALA LUMPUR: In a last minute decision, Dewan Rakyat Speaker Datuk Azhar Azizan Harun has allowed all lawmakers to enter the House and listen to Budget 2021 being tabled.

This followed appeals from both sides of the bloc in urging the Speaker to allow all MPs to be seated in the House.

On Thursday (Nov 5), a decision was made following discussion with party whips to only allow 80 lawmakers to be present in the Dewan Rakyat from Friday (Nov 6).

Opposition leader Datuk Seri Anwar Ibrahim had interjected before the start of the tabling of Budget 2021 and asked the Speaker to reconsider the decision.

"I understand that the decision comes after the advice by the National Security Council and the Health Ministry.

"However, the House has been sanitised. I believe this short sitting for today (Friday) will not affect our health seeing how all lawmakers were present in the House yesterday and the days before," he said.

This was supported by Datuk Seri Bung Moktar Radin (BN-Kinabatangan), who said the tabling of the Budget is one of the most important events for Parliamentary proceedings.

Azhar, however, said the decision was made on consensus, and even some deputy ministers who appealed to enter the House were not allowed to do so.

Datuk Seri Tajuddin Abdul Rahman (BN-Pasir Salak) said there was still a lot of space in the House and all the lawmakers have followed the standard operating procedures (SOPs).

"Hence, there is no reason why we can't fill the space with more lawmakers," he said.

To this, Azhar then said he wanted to get the view from the chief whips who agreed to the decision earlier.

Lim Guan Eng (PH-Bagan) interjected and said although the consensus was made, a special consideration can be given to the current situation.

Minister in the Prime Minister's Department Datuk Takiyuddin Hassan then said that the motion under the Standing Orders was already tabled and passed.

Azhar also noted that all the issues should have been brought up to him earlier.

However after some time, Azhar then decided to allow all lawmakers to enter the august House.

The House was adjourned for 10 minutes to allow MPs to come in.

After 10 minutes, Azhar then said he had allowed for MPs to come in only for Friday.

"I want to stress that the exception is only for today, and hope all MPs will cooperate as much as possible.

"However, the decision to allow 80 MPs decided upon with the chief whips for the entire Dewan Rakyat meeting must be adhered to strictly beginning Monday (Nov 9)," he said.

Azhar also advised that any special request should be given prior notice so discussions can be held on the matter. 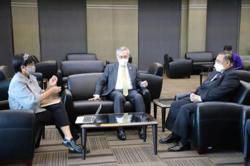