PETALING JAYA: An evening fire at a plastic processing factory located upstream of Sungai Kuang has been found to be the cause of odour pollution in the river.

A statement issued by Selangor environment, green technology, science, technology and innovation and consumer affairs committee chairman Hee Loy Sian said the fire was detected by Selangor Water Management Board (Luas) during a 24-hour operation to check on river pollution.

“Luas detected a fire incident near Sg Kuang while conducting Ops Water Source at about 10pm on Friday.

“Based on the information, the Selangor Fire and Rescue Department said the blaze broke out at the factory at 6pm,” said Hee.

As the distance of the factory is just about 33km to the Rantau Panjang Water Treatment Plant, immediate action was carried out to address the pollution which has been measured at three TON (threshold odour number) in Sungai Kuang by Luas, Air Selangor and the Selayang Municipality Council, he added.

Operation at the treatment plant was not stopped and water supply was not disrupted, he said.

Odour sampling tests conducted by Luas and Air Selangor traced the odour pollution to soot being discharged into the river’s waterways.

The black residue marring the water surface is said to be from combustible materials from the factory fire. 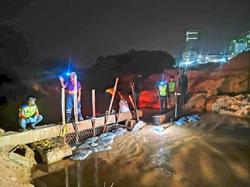