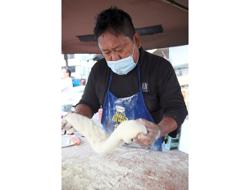 Tasty pastry: Johnny at his stall in Serdang. His yau char kwai sells out by 10am.

A THAI chef who lost his job at a Kuala Lumpur restaurant due to the Covid-19 pandemic has become popular after a story of him selling yau char kwai (Chinese crullers) tugged at the heartstrings of Malaysians, Sin Chew Daily reported.

The father of two, known to many as Johnny, set up a stall called Good Papa in Serdang, Selangor, after he was made redundant from the Thai eatery where he had served as the chef for 10 years.

Since his wife, who has health problems, has returned to Indonesia, Johnny had to look after their daughters, aged six and 11.

Johnny’s plight moved many customers who shared his story on Facebook.

Sales shot up as a result with recent photos showing a long queue at his stall. His yau char kwai would sell out by 10am daily.

Johnny, 45, also sells red bean buns and sesame buns between 7am and noon.

He rents the space at a coffee shop for RM10 a day. Other hawkers would help look after his two girls.> Federation of Hokkien Associations of Malaysia president Tan Sri Lim Hock San has urged MPs to put aside their differences and work towards the people’s well-being amid the Covid-19 pandemic, Kwong Wah Yit Poh reported.

He said the country now needed stability in its fight against the pandemic.

“We need to be united in prioritising development, helping the rakyat overcome their challenges and working towards a prosperous

society, ” he said in a statement.

> Speculation is rife in the Hong Kong showbusiness that scandal-hit actress Jacqueline Wong has finally been allowed to return to the small screen after being banned for more than a year, China Press reported.

Her character in TVB dramas was replaced last year while the shows that she appeared in were not aired following the revelation of her affair with married singer Andy Hui, 52.

Wong, 31, was caught kissing Hui at the back of a taxi in April last year. It scandalised the Hong Kong public for months.

She took a six-month hiatus in the United States before returning to Hong Kong in December.

Last month, a sci-fi romantic comedy The Offliners, in which Wong starred, was finally aired after being shelved last year.