IPOH (Bernama): The police have exposed an online gambling syndicate that was in operation for eight months from a terrace house at a gated and guarded community in Sunway City, Tambun here.

"The police also seized three laptops, 20 mobile phones of various brands, an Internet modem, a log book and seven Indonesian passports," he said at a press conference on Wednesday (Oct 28).

He said the syndicate's modus operandi was to promote gambling online through apps such as WeChat, MiChat, Facebook and short messaging system that targeted locals and could rake in between RM5,000 and RM15,000 a day.

"The house was rented by the syndicate last February with the help of a local known as Chow, while the operator was offered a salary of between RM2,000 and RM5,000, depending on profits," he said.

According to ACP Asmadi, initial investigations found that all detainees entered the country using social passes from Pontianak, Indonesia by flying into Kuala Lumpur International Airport.

He said all those detained were remanded for 14 days beginning last Sunday and the case would be investigated under Section 4(1)(C) of the Common Gaming Houses Act 1952 and Section 15(1)(C) of the Immigration Act 1959/63. – Bernama 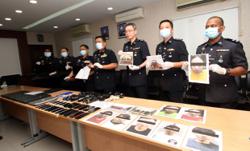