KUALA LUMPUR: The Yang di-Pertuan Agong has decided that there is no need to declare a state of emergency in the country.

Al-Sultan Abdullah Ri'ayatuddin Al-Mustafa Billah Shah Ibni Almarhum Sultan Haji Ahmad Shah Al-Musta'in Billah also reminded all politicians to immediately put a stop to all forms of politicking that could disrupt the stability of the country, said the Comptroller of the Royal Household of Istana Negara Datuk Ahmad Fadil Shamsuddin.

“Sultan Abdullah also said that there was no need for Members of Parliament to continue their irresponsible actions that could disrupt the stability of the existing government, ” he said in a statement on Sunday (Oct 25).

He said that Sultan Abdullah and the Malay rulers had gone through the proposal to declare a state of emergency and felt that the government had managed to contain the pandemic effectively.

He said Prime Minister Tan Sri Muhyiddin Yassin on Friday (Oct 23) had requested the proclamation of emergency under Article 150(1) and proclamation of Emergency (Essential Powers 2020) Ordinance pursuant to Article 150 (2B) of the Federal Constitution to combat the threat of the Covid-19 pandemic in the country.

“The King strongly believes in the ability of the government under the leadership of the Prime Minister to continue to implement policies and carry out enforcement to curb the Covid-19 pandemic from spreading,” he said.

Ahmad Fadil added that Sultan Abdullah stressed that the 2021 Budget to be tabled in Parliament was very important to the people to combat Covid-19 and to restore the nation’s economy.

"As such, the financial allocation is much-needed by frontliners to ensure they can carry out their jobs and responsibilities smoothly, ” he said, adding that Sultan Abdullah was very concerned about the people’s worries due to the emergence of several new clusters and the spike in daily cases.

Ahmad Fadil said that Sultan Abdullah urged everyone, regardless of their background and political leaning, to set aside all differences and unite and play their respective roles to help the government and the authorities to curb the spread of Covid-19.

The Malay rulers had earlier held a special meeting at Istana Negara on to discuss the government’s plan to declare a state of emergency to tackle the worsening Covid-19 situation.

On Friday (Oct 23), Muhyiddin and several ministers presented the Sultan Abdullah with the plan to declare a state of emergency at Istana Abdulaziz in Kuantan. 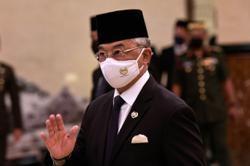