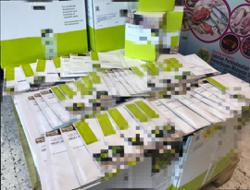 SEPANG: The Malaysian Quarantine and Inspection Services Department (Maqis) seized 149 birds of the Serinus Canaria species worth RM72,431 after they were found to have been brought into the country without valid import permit.

The birds were imported from the Netherlands.

There was no permit issued by the department for the import of the birds, he said in a media statement here yesterday.

Tarmisal said it was an offence to import live animals without permit and those caught doing so could be charged under Section 11(1) of the Malaysia Quarantine and Inspection Services Act 2011.

Offenders face a maximum fine of RM100,000 or imprisonment for up to six years or both, upon conviction. — Bernama