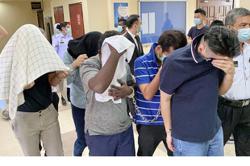 He described this as a historic and meaningful moment.

“With this, I wish to inform that the Road Transport (Amendment) Act 2020 which carries heavier penalties for traffic offences, particularly related to Sections 41 to 45, will come into operation from Oct 23.

“We hope that the latest amendments will create greater public awareness among road users to obey traffic laws to ensure that our roads will be safer for all, ” he said in a statement yesterday.

Dr Wee said that since he was sworn in as the Transport Minister, road safety had been a central priority in terms of improving policy and enforcement practices under the purview of the ministry, particularly in amending the Act.

He added that through his instructions, the Road Transport Department had immediately begun to finalise the draft amendments to the Act from May 4, adding that during that same period he had also held dialogues with other stakeholders such as community leaders and heads of non-governmental organisations.

Dr Wee said he presented the Bill to amend the law to the Cabinet on July 17, adding that the first reading was presented in the Dewan Rakyat on July 27.

“I would like to take this opportunity to record my deepest gratitude to His Majesty and the support of my fellow parliamentarians for enabling a timely passing of the Bill in both Houses.

“The gazettement of these new amendments will serve to greatly strengthen and improve the Act in the interest of Malaysian road users and pedestrians, ” he added.

Under the newly amended Act, those who cause death due to recklessness or driving under the influence of alcohol and drugs will have to face stiffer penalties.

For example, Section 41 stated that those found guilty of dangerous or reckless driving causing death could face between five and 10 years as well as a fine of not less than RM20,000 and not more than RM50,000.

They will also have their driving licence suspended for five years.