KUALA LUMPUR: Police arrested three men in connection with the theft of a bag filled with RM1.6mil in cash at the parking lot of a Kepong shopping mall on Oct 8.

Kuala Lumpur police chief Comm Datuk Saiful Azly Kamaruddin said the victim worked at a company which converted bitcoins into cash and was transporting the cash for a client when the robbery happened.

"The suspects punched the victim in the stomach before fleeing in a car," he told a press conference at Sentul police headquarters on Monday (Oct 19).

He added that police tracked down the suspects eight days later following various raids in the city.

"We detained three men aged between 31 and 42 and we seized RM1.03mil in cash, a few gold bars and jewellery," said Comm Saiful.

Comm Saiful added that the initial investigation revealed that the suspects had spent some of the cash to purchase a car.

"The suspects had tailed the victim about five days prior to the heist and all – who have no criminal record - have been remanded until Oct 22," he said.

Comm Saiful advised companies dealing with large amounts of cash to employ a security company to prevent them from being targeted by criminals.

"If you have to use runners or dispatches, make sure to use different routes to avoid being tailed," he added. 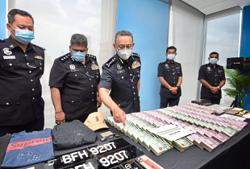