The Alliance for Safe Community chairman said the latest water cut came just after reports that the water supply has been restored to 686 areas due to the previous water disruption.

Incidentally, this was the same river that caused the pollution that disrupted water supply to millions of consumers less than three months ago.

"This is unbelievable. This is unacceptable. This is scandalous. It would seem that all the advice, exhortations and appeals made after the earlier disruption was water off a duck’s back," he said in a statement on Monday (Oct 19).

Many NGOs and concerned citizens had then called for an audit of the factories that line Sungai Selangor to ensure that they did not pollute the river, he added.

"However, apparently that was not done. Why? Somebody or some authority or some agencies must be held accountable. They owe the public an explanation. An apology from them is not sufficient," he added.

Lee said the public should be compensated for the gross inconvenience, the hardship and the stress that they have had to endure needlessly.

"These disruptions could not have come at a worse time. At a time when we are facing the threats of fast-spreading Covid-19 infections, we can least afford to be lax.

"As part of the SOPs during this pandemic, we are exhorted to keep proper hygiene which requires us to wash our hands frequently but how does one do this without running water," he questioned.

Lee said the public could not even go to their friends' houses for a shower given movement restrictions due to the conditional movement control order (MCO).

"It’s time that politicians got into the act and use the carrot or the stick to ensure such occurrences are not repeated.

"They should put their political differences aside and work together for the common good," he added.

Lee reminded politicians to save their energy from jockeying for positions and reserve them to ease the people’s burdens.

"After all, weren’t all their pre-election manifestos about serving the rakyat?

"The people need them to act now. The people are not interested at this time who runs the government and who governs," Lee said.

He lamented the fact that people just wanted their basic needs to be met.

"Surely that’s not too much to ask. The rakyat are now asked to accept restrictions upon restrictions, some not avoidable and some avoidable.

"The restrictions due to Covid-19 are not avoidable. All other restrictions are avoidable, including those caused by the disruption of water supply. Tackle the avoidable, so that we can all concentrate on the non-avoidable.

"The people are fast losing patience. They have come to the end of their tether," he added. 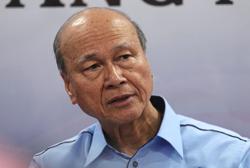