PETALING JAYA: Politicians and experts have called on all quarters to heed the King’s call to resolve their political differences and focus on fighting the Covid-19 pandemic.

reflect instead of creating more uncertainties due to politicking.

“The King wants politicians to be more aware of their words and actions as they cause uncertainty and affect the economy,” he said.

The Arau MP noted that the recent political manoeuvrings by several politicians had affected the local market and caused anxiety among investors.

He said Datuk Seri Anwar Ibrahim’s announcement that he had a list of 121 MPs backing him as the next prime minister, for example, had affected the stock market and led to further confusion.

MCA secretary-general Datuk Chong Sin Woon called on all quarters, irrespective of their political affiliation, to heed the Yang di-Pertuan Agong’s decree in combating the pandemic for the sake of the nation and avoid dragging the country into a political crisis.

“As the third wave of the contagion spreads, the economy continues to be sluggish and people’s lives grow increasingly difficult, the government as well as the ruling and opposition parties should take every concerted effort to overcome the pandemic and revive the economy to overcome the rakyat’s difficulties,” he said.

Chong added that maintaining political stability must be the responsibility of all political parties and politicians to avoid any recurrence of uncertainties and instability that could worsen the economic situation and plight of the people.

Santubong MP Datuk Seri Dr Wan Junaidi Tuanku Jaafar said the King was reminding politicians that this was not the time for aggressive politics, fake news or rumour mongering.

“The King wants us to reflect on the destitute who might not have food on the table while leaders are fighting for the prized position and leadership,” he said.

He said the King wanted political impasses to be resolved through the constitutional political process.

“It should be done in this process, but not to the extent where it would further destabilise the country’s politics and economy,” he added.

Beaufort MP Datuk Azizah Mohd Dun said the King’s call for politicians to self-reflect was aimed at preventing more uncertainties amid the pandemic and economic crisis.“We are fighting an unseen enemy in Covid-19 and our economy is facing uncertainties. It is timely for the Yang di-Pertuan Agong to call for these problems to be resolved through discussions,” she said.Parti Pribumi Bersatu Malaysia information chief Wan Saiful Wan Jan agreed that this was not the time for politicians to squabble over power as it was against the wishes of the rakyat at the moment.

“Politicians should focus on the rakyat now instead of jostling for positions or deliberately destroying the country’s stability and economy,” he said in a statement.

“We should be fighting Covid-19 by creating political unity across partisan lines and not create divisions for personal interest.”

“As a good and wise King, he has consulted all parties and we should respect his views and wisdom as it is done in the best interest of all concerned,” he said.

Ramon added that the King’s call would also allow the government to focus on producing a “professional budget” on Nov 6 without getting distracted by politicking.

Moderation advocate Anas Zubedy said the King wanted politicians to deal with Covid-19 and the economy instead of dragging the nation into political turmoil.

“At this time, there are only two real concerns – dealing with the economy and the pandemic. Politics is secondary,” he added.

Anas said the King did not want politicians to harm the economy by causing instability. 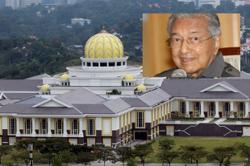