KUALA LUMPUR: Bukit Aman has recorded statements from Datuk Seri Anwar Ibrahim on several issues, including the circulation of the list of 121 names of Parliament Members (MP) allegedly supporting him to be the Prime Minister, says Federal CID director Comm Datuk Huzir Mohamed.

He said Anwar had come to Bukit Aman on Friday (Oct 16) to have his statement taken by the CID Special Investigations Unit.

"He was questioned regarding investigations into the circulation of the names of 121 MPs supporting him which was published in an online portal.

"The investigations were classified under Section 505(b) of the Penal Code and Section 233 of the Communications and Multimedia Act for circulating statements with the intent to cause public alarm or induce the public to commit offence against the state and sharing offensive or menacing content," he said in a statement on Saturday (Oct 17).

He said a total of 113 police reports have been received, including complaints from MPs denying that they support him.

"The allegations were vastly circulated in the media, causing unhealthy speculation.

"The circulation of the statement online was done with the intent to cause public fear or anxiousness, or induce the public to commit offence against the state," he said, adding they also took statements from Anwar on five other cases on the same day.

He said the cases investigated included the statement made alleging that the government led by the Prime Minister had fallen due to lack of Dewan Rakyat majority support, the sodomy case and statutory declaration made by Aidil Azim Abu Adam and the speech alleging that gambling dens were operating during the movement control order (MCO).

Comm Huzir said they also took his statement on a video of a speech alleging that 6.7mil foreigners were in Malaysia as well as the press conference alleging the handing over of authentic documents to the Yang di-Pertuan Agong.

"The investigations were conducted professionally and without any political pressure or instruction from any party," he said, urging all parties to give space to the police to conduct investigations in a fair and transparent manner.

He also warned that stern action would be taken against anyone who intentionally threatened public order and safety. 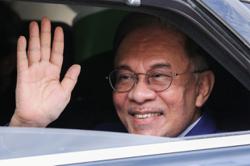