The district police chief had made a decision to self-quarantine, after coming in contact with a close contact of a Covid-19 positive case.

"The Petaling District Medical Officer who was the close contact had taken a Covid-19 screening which came back negative.

"This has cleared ACP Nik Ezanee for duty," he said in a statement on Wednesday (Oct 14).

It was reported that hours after holding a press conference on the enhanced movement control order (MCO) at a workers’ hostel on Monday (Oct 12), ACP Nik Ezanee also made the decision to self-quarantine himself.

“I was informed around 2pm by a District Health official that someone whom I had been in contact with over the planning on the enhanced MCO here was a close contact to a positive case, ” he had said.

Several reporters who covered the press conference also took the decision to self-quarantine. 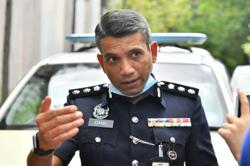