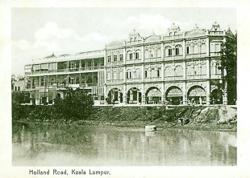 KUALA LUMPUR: Police are looking for 13 people of interest in connection with the murder of a woman two years ago.

"The murder occurred on July 4,2018 and a suspect was arrested and charged in court for murder," he said in a statement on Tuesday (Oct 13).

He said they were also looking for Bangaldeshis Sha Alam, Probath Barua.

"We are also looking for Rafiqul Islam, Farid Howlader, Sheikh Ashif, Mohd Sohid and Mohammad Nazmi," he said, adding that the last five suspects listed were believed to be staying at Komplek Damai in Chow Kit, Kuala Lumpur.

It was reported that the dismembered body of the 29-year-old woman was found stuffed in two luggage bags on the Sungai Gombak riverbank near the Putra World Trade Centre.

The remains were discovered by a city council worker who spotted a foot sticking out of a bag around noon on July 5.

It is believed that one bag contained the victim's torso while the other contained her head, arms and legs.

The body parts were in black plastic bags stuffed into the luggage bags.

The woman's husband was arrested in Pengerang, Johor on July 25,2018.