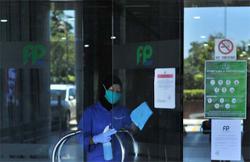 LABUAN (Bernama): Ninety-five passengers who were on board the AirAsia flight AK5172 from Kuala Lumpur to Labuan on Oct 6 are urged to get tested for Covid-19 immediately after a passenger tested positive for the viral infection last Sunday.

Labuan Health Department director, Dr Ismuni Bohari said no one on the 7.20am flight should skip the test.

Ismuni also urged guests at a wedding ceremony on Oct 3 at the Labuan Financial Park Convention Hall to be tested as one of them had tested positive.

Over 200 people who attended the wedding have so far been tested at the Membedai Health Clinic but none has obtained results yet.

Labuan currently has two clusters, namely the Bah Bangat cluster (which started on Oct 8) with nine patients including a secondary school student, and the Bah Bundle cluster with five patients who are still being monitored at the isolation centre of Labuan Hospital.

Ismuni said a total of 13,462 samples had so far been taken from Sabah returnees since Sept 26 and as of Monday, 9,680 results had been released while the rest were still pending. – Bernama

Sarawak polls can wait until Covid-19 situation improves, says Abang Johari
Mission to repatriate Malaysians from New Delhi and Mumbai arrives at KLIA
Befrienders: Over 100 calls received daily since start of MCO 3.0
On the spot compound should be issued to SOP violators, says Ismail Sabri
Help us by staying safe, say frontliners
King advises people to stay home to flatten the curve
‘We have to be on guard’
‘We don’t want to decide who lives and who dies’
‘Don’t let our sacrifices be a waste of our efforts’
Hopefully, we can have our lives back next year