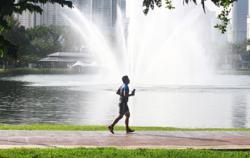 PETALING JAYA: Only three reasons, other than work, will be accepted in allowing cross-state travel involving the areas where the conditional movement control order (MCO) will take into effect on Wednesday (Oct 14), say police.

The reasons are medical emergencies, deaths and for those who have to utilise KL International Airport (KLIA), KLIA2 or the Sultan Abdul Aziz Shah airports for air travel.

Police also said that those travelling (under the three reasons) either into or out of the areas under conditional MCO - Selangor, Kuala Lumpur and Putrajaya - would also have to send in a permit application form to a police station closest to them before making their journey.

For example, an individual from Johor who is heading to Pulau Penang and needs to cross Selangor because of an emergency, he would have to send a permit form to the police station closest to his residence before making the journey.

For an individual who is heading from Melaka to Putrajaya for an emergency, he would have to send a permit form to the police station closest to his residence before making the journey.

“However, if an individual who is travelling has forgotten to send in the form, they can send it to any of the closest stations before they cross the road blocks at the locations under the conditional MCO,” the police said in a Facebook post on Tuesday (Oct 13).

They stressed that only a maximum of two people are allowed in each vehicle.

They added that workers are allowed to cross district and state borders, with the condition that they have a valid work pass or a letter from their employer.

Those working in the same district do not need a letter of a work pass.

Selangor, Kuala Lumpur and Putrajaya will be placed under the conditional MCO for 14 days from Oct 14 until Oct 27 following a spike in Covid-19 cases.

The form can be obtained from any police station or downloaded here.

On Monday (Oct 12), Senior Minister Datuk Seri Ismail Sabri had said under the conditional MCO, inter-district travel would not be allowed and employees who have to make such travel must have a letter from their employer and show their staff pass.