Party’s over: Police and MBPP officers with the revellers during the raid at a private premises where a birthday party was held during the MCO in Batu Ferringhi, Penang.

GEORGE TOWN: A drug-fuelled birthday party was cut short after 42 revellers, including eight women, were detained by police at a rented bungalow in Batu Ferringhi.

Besides being slapped with a RM1,000 fine each for defying the movement control order (MCO), four of them were also caught for consuming drugs.

Of the four, one of them is being investigated for possessing dangerous drugs.

George Town OCPD Asst Comm Soffian Santong said police seized 1.4g of ketamine from the revellers aged between 20 and 40 during the Saturday operation which began at 10pm.

He said 17 of them have various drug-related records.

“We detained one of them under Section 12(3) of the Dangerous Drugs Act for possession of drugs.

“The same person and three others are also detained under Section 15(1) of the same Act for the consumption of dangerous drugs,” he said in a statement.

ACP Soffian said the Penang Island City Council (MBPP) also issued the houseowner a compound for running a homestay business without a licence.

In another raid on a nightspot in Jalan Dr Lim Chwee Leong, 76 patrons were fined RM1,000 fine for not observing the MCO.

Police also arrested a 21-year-old caretaker for operating without an entertainment licence from the MBPP during the four-hour operation which ended at 2pm yesterday.“We seized electronic gadgets and equipment, RM350 cash and other items in the raid on the entertainment outlet,” said ACP Soffian.

He advised homestay operators to get the necessary approval and licence from the MBPP before operating and warned others not to use the premises to host private parties without adhering to the standard operating procedure (SOP), especially physical distancing.

He added that they also checked 16 night market stalls in Batu Ferringhi, with all of them in compliance with the SOP.

“We will continue with such operations with the help of the Health Department and MBPP. Those who flout the rules will be arrested and compounded,” he said. 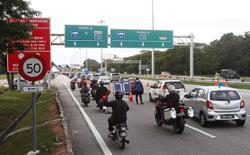