Help to make her house a home 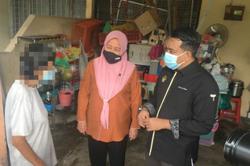 IPOH: The Perak government will assist a retired teacher who lives among garbage and clutter in her double-storey terrace house in Simpang Pulai here.

“The unwanted items she has been bringing home have turned into a pile of garbage of about 1.5m high in her house compound, a condition which has become a concern for the neighbours, not only for her health, but also a menace for nearby residents.

“It also creates an odour in the area and the neighbours feared her place would become a breeding ground for the Aedes mosquito,” she said when met during her visit to Chung’s house yesterday.

Besides sending Chung for counselling by the Welfare Department, Dr Wan Norashikin said the state government would get the Ipoh City Council (MBI) to clear the pile of rubbish.

Chung is said to have been staying alone in the house for the past few years.

Wan Norashikin said the state government would also get the assistance of the Health Department for Chung to be sent for a medical examination.

She said legal action could be taken against Chung if she continues with her hoarding habit.

The last resort is to send her to an old folks home as she does not want to stay with her family members, she added.

Chung said her children would come over to send food to her.

“I have a daughter and two sons, all in their 30s, but they do not want to stay with me because they don’t share my interests,” she said.

The woman is often seen cycling in the neighbourhood until late at night, collecting trash. She would then climb over the pile of garbage to get into her house.

Ipoh mayor Datuk Rumaizi Baharin said MBI had taken action against Chung for the pile of garbage in her compound, adding that a clean-up operation would begin tomorrrow.