Heartbreak for twins separated during celebration

Keeping family close: Chee Kein (left) enjoying mooncakes and pomelo with Ngoi and her son Mathias Ong at her home.

JOHOR BARU: For many, the Mid-Autumn Festival – the second most important Chinese festival after the Lunar New Year – is a much anticipated time of reunion among family members and loved ones.

That is not the case for a pair of 21-year-old twins working in Singapore. Not only were they unable to celebrate the occasion with their family in Malaysia, they were also forced to be apart for the festive season after one of them tested positive for Covid-19 a few days ago.

Sales promoter Ngoi Chee Kein, said he and his younger twin Chee Keun had earlier made plans to visit their aunt in Singapore for a mini Mid-Autumn Festival celebration.

“Unfortunately Chee Keun tested positive for Covid-19 on Monday after his housemate was warded a few days earlier.

“The unexpected turn of events forced us to spend the Mid-Autumn Festival away from each other as he is being quarantined, ” he said.

Chee Kein said since they both started working in Singapore in 2018, they would always find time to travel back to their hometown in Kampung Parit Keliling, located in the outskirts of Melaka, for such special occasions.

He said seeing families happily shopping for mooncakes at his workplace reminded him of home and his parents and two younger brothers, whom he last saw in February during Chinese New Year.

“I hope Chee Keun recovers soon so we can have a proper get-together, ” Chee Kein said, adding that this was the first time they would be spending a festive celebration away from each other.

The Mid-Autumn Festival, which is observed on the 15th day of the eighth month on the Chinese lunar calendar, falls on Oct 1 (today).

The twins’ aunt, Angelina Ngoi, 52, said she opened her home to a few other relatives who, like her, were unable to return to Malaysia for the festivities.

The mother of two, who works as a Chinese culture instructor, said she initially wanted to have a large celebration but had to scale it down as the Singapore government did not allow home gatherings of more than five people at any given time.

“So my nieces and nephew took turns to visit my house across a few days, where we ate mooncakes and pomelo to observe the festival.

“Of course the atmosphere in Singapore is a far cry from how it is back home where my eight other siblings and their own families would gather at my late father’s house for a big family reunion, ” she said.

She added that this year’s Mid-Autumn Festival was a bittersweet one as her husband, who works as a managing director of a company in Vietnam, was also unable to return home since February due to the pandemic travel restrictions.

“My husband and I are tuning into the news every day, hoping to get some good news that would allow him to come back.

“While we are unable to reunite this Mid-Autumn Festival, I hope that we can see each other and our relatives back home again for Chinese New Year next year, ” she said. 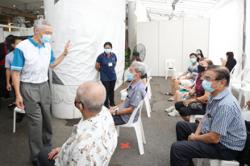