KUALA LUMPUR (Bernama): The High Court here on Monday (Sept 28) allowed an application by Datuk Seri Dr Ahmad Zahid Hamidi to have his trial, which had been fixed for Monday until Wednesday (Sept 28 to 30), to be postponed as the former deputy prime minister is still under quarantine due to Covid-19.

Lawyer Hamidi Mohd Noh, representing Zahid, informed the court that his client could not be in court because according to the Home Surveillance Order (HSO), he needed to be quarantined at home from Sept 26 until 28.

"My client did a swab test after a surprise visit by officers from the Ministry of Health (MOH) at his house yesterday and the result was negative.

"Today he will be undergoing mandatory MOH test at his residence for Reverse Transcription Polymerase Chain Reaction (RT-PCR) to determine whether the result is negative or positive. I was made to understand the test can only be done at the end of the day today.

"As such, the defence wishes to apply for postponement of the trial for today, tomorrow and Wednesday," he said.

Hamidi said he was also made to understand that Zahid might be at risk as on Sept 19, he was with (Barisan Nasional) candidate for Pitas, Sufian Abd Karim, who had tested positive for Covid-19.

"Sufian and my client had taken pictures together ... I do think that we need to take extra precaution to avoid spreading the virus,” he added.

Judge Collin Lawrence Sequerah allowed the application by the defence and vacated the trial dates for Monday until Wednesday.

"I think we should be looking towards that as well, so, the trial dates, today until Wednesday will be vacated, we will resume on Oct 12," said Judge Sequerah.

During the hearing on Sept 21, the court granted Zahid’s application to have his trial, which had been set for two days (Sept 21 and 22), to be postponed as he had to go for a Covid-19 screening.

Zahid is facing 47 charges, with 12 of them involving criminal breach of trust, eight for corruption, and 27 for money laundering involving tens of millions of ringgit in funds belonging to Yayasan Akalbudi.- Bernama 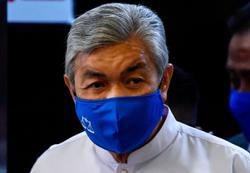