Mohd Zawawi with the drugs seized from the foreign vessel in Langkawi waters. The two suspects who jumped into rough seas to escape the MMEA have yet to be found. - Bernama

LANGKAWI (Bernama): The Kedah and Perlis Malaysian Maritime Enforcement Agency (MMEA) has thwarted an attempt to smuggle 56.5kg of syabu worth RM11.3mil after intercepting a foreign fishing boat 2.3 nautical miles north east of Tanjung Kemarong, near here on Friday (Sept 25).

Its commander First Maritime Admiral Mohd Zawawi Abdullah said the seizure, which was the biggest this year, was conducted during Op Eagle Eye based on intelligence information and monitoring by the Langkawi Malaysian Maritime SEA Monitoring System (Swasla) at 1am.

''Based on the information, an MMEA lightning boat detected a suspicious-looking Thai fishing boat with two suspects on board leaving the territorial waters of a neighbouring country near Tanjung Kemarong.

''The boat tried to ram the lightning boat several times, which had been chasing them for 40 minutes. The two suspects jumped overboard.

Mohd Zawawi said MMEA believes the drugs are meant for markets abroad and Langkawi waters were only being in transit.

He said the syabu and the wooden fishing boat were taken to the Kedah and Penang MMEA Headquarters in Bukit Malut for investigation under Section 39(B) of the Dangerous Drugs Act 1952 and Section 307 and 186 of the Penal Code.

''MMEA has also mobilised a search and rescue for the two suspects. However, they have yet to be found due to rough seas,'' he added. – Bernama 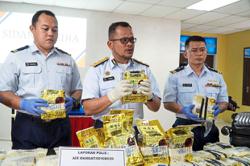 One dead, one missing after fishing boat capsizes off Muka Head