BUKIT MERTAJAM: Four eateries were ordered closed while nine sundry shops were issued with compounds during a joint operation by the authorities.

In total, all the 13 foreigner-run shops at a mall here were slapped with 21 compounds amounting to RM57,000 in the operation codenamed Ops Sapu.

State Health Department officer Mohd Wazir Khalid, who led the operation, said the eateries were shut down after live cockroaches were found in the kitchen premises.

He said a local Chinese woman and eight Myanmar nationals, including a woman, were arrested under Section 4 of the Food Act 1983 for failing to produce work permits and prove business ownership.

“Some were also found to have hired workers who did not take typhoid injections or undergo food handling courses,” he said after the operation yesterday involving the state Health Department, police and Seberang Prai City Council.

On the sundry shops, Wazir said they seized various food products along with alcoholic beverages worth RM3,860 in total.

“The items seized have no proper labelling, no importer or distributor addresses and most of the products were labelled entirely in Burmese.

“Selling food products without proper labelling or information is an offence.

“We are suspicious about the origins of these products and how these items were brought in to the country since imported items need to have labels either in English or Bahasa Malaysia,” he said.

He said there was a particular drink, which had caused deaths, that could be found here.

“This is very worrying,” Wazir said.

Meanwhile, Wazir said that although the premises that were raided had licences owned by Malaysians, almost 100% of them were managed by foreigners.

“We warn those involved to take this seriously because if the premises are managed by foreigners, things can get difficult for the officials to carry out operations, especially in terms of communication,” he said. 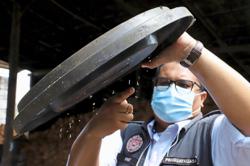