SHAH ALAM: A former political aide to an ex-minister has been slapped with six charges for graft at the Sessions Court here.

Mohd Saifullah Mohd Minggu @ Mohd Hisham, 29, who was a senior private secretary to then tourism, arts and culture minister Datuk Mohamaddin Ketapi, was accused of soliciting and receiving bribes amounting to RM106,500 from Ronald Seto Kong Seng, the owner of Syarikat Inter Bev Network Sdn Bhd, through one Roslan Lahada.

For the first three charges, Saifullah is accused of receiving bribes amounting to RM90,000 as remuneration to help secure tenders for creative branding and advertising space from the ministry.

For the remaining three charges, he is accused of soliciting RM16,500 from Seto for the rental deposit of a property at Vipod Residences, Jalan Kia Peng, Kuala Lumpur.

He is accused of committing the offences between Dec 21, 2008, and March 30, 2019, at several locations, including Temasya Anggun Glenmarie, Shah Alam; Bandar Puteri Puchong, Kota Damansara and Dengkil.

Saifullah claimed trial to all six charges, which were read to him before Judge Rozilah Salleh.

Malaysian Anti-Corruption Commission (MACC) Deputy Public Prosecutor Muhammad Asraf Mohamed Tahir asked for the charges to be transferred to the Kuala Lumpur Sessions Court, where the accused had been slapped with 18 charges related to the same allegations last month.

Defence counsel Md Yunos Sharif informed the court that his client had paid RM200,000 bail, surrendered his passport to the court and had been ordered to report to the nearest MACC office once a month for the previous 18 charges.

He asked for the RM200,000 bail to be extended to the current six charges.

The judge agreed for the transfer of the charges to the Kuala Lumpur Sessions Court, as well as extending the bail to the new charges.

The 18 charges at the Kuala Lumpur Sessions Court are set for mention on Sept 23 where the additional six charges will be re-read.

Saifullah had claimed trial to the earlier 18 charges at the Kuala Lumpur Sessions Court on Aug 19, where he was accused of soliciting and receiving bribes amounting to RM3.1mil from Seto for the ministry’s branding and advertising contracts.

Saifullah’s fiance Nurfadziana Abdul Kadir, 28, had also claimed trial on Aug 9 to a charge of allegedly abetting him in receiving the bribes.

If found guilty, Saifullah can be jailed up to 20 years and fined not less than five times the amount of gratification or RM10,000, whichever is higher. 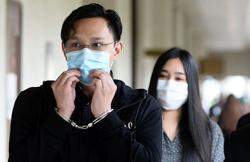