Melaka Historic City Council in a statement said the decision to rename the street was made to honour the former governor’s deeds, contributions and ideas, especially in the conservation and restoration of the historical city, which is also a Unesco World Heritage Site.

“The state executive council in their meeting on July 8 unanimously agreed to give part of Jalan Merdeka a new name, that is Jalan Tun Khalil Yaakob.

“The council has since put up three plates bearing the new street name near the Red Building Clock Tower roundabout, in front of Taming Sari Tower and in front of Dataran Pahlawan shopping mall, ” it added.

Khalil, who hails from Kuantan, Pahang, was sworn in as the sixth Yang di-Pertua Negeri on June 4,2004.

He is succeeded by Tun Mohd Ali Rustam since June 5 this year. — Bernama 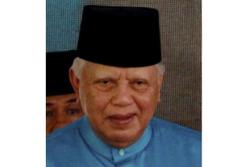