All eyes on Johor assembly

JOHOR BARU: Tan Sri Muhyiddin Yassin (pic) will be in town to attend the Johor state assembly meeting today which will be closely watched.

The Prime Minister, who is the Gambir assemblyman, will also be present for the meeting when it continues on Sunday.

The spaced-out two-day meeting is due to the Friday-Saturday weekend observed here.

In between, Muhyiddin, who is the Parti Pribumi Bersatu Malaysia president and state party chief, will head to Sabah which is holding its nomination day on Saturday.

Five motions are expected to be tabled at the state assembly – four from the state government and one from Pakatan Harapan.

The motions involve a state economic stimulus package, the appointment of a senator, additional budget and rebate on land tax.

However, the focus will be on former mentri besar Datuk Osman Sapian who is embroiled in a controversy for allegedly attending programmes organised by Parti Pejuang Tanah Air.

The 69-year-old Kempas assemblyman is expected to be hauled up by the Bersatu disciplinary board after the state assembly meetings.

He faces the possibility of having his Bersatu membership terminated after two viral videos showed him campaigning in support of an independent candidate during the Slim by-election and attending a dinner held by Pejuang.

Osman, who courted many controversies during his one-year tenure as the mentri besar, could force a hung state assembly if he decides to quit the party.

In the 56-member state assembly, Barisan Nasional and Perikatan Nasional hold 29 seats, with Umno having 14, Bersatu 12, MIC two and PAS one.

Speaker Suhaizan Kaiat said the present state government would not have a simple majority if Bersatu acted against Osman or if the latter quit to become an independent.

“If that happens, then the present state government will have 28 seats while Pakatan will still have 27 seats unless Osman decides to support the Opposition,” he said.

In the event of a hung assembly, he said the Speaker would have the deciding vote on whether a motion was passed or not.

Under Undang-Undang Tubuh Kerajaan Negeri Johor 1895, the state government can still carry out its duty as long as the mentri besar has the majority support of the 56 elected representatives.

On Tuesday, Mentri Besar Datuk Hasni Mohammad said the state government still had the support of a majority 29 assemblymen. 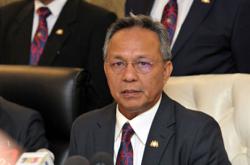 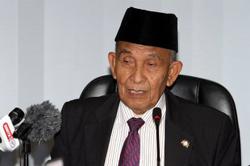