Stating the facts: Azam speaking during an anti-corruption programme with southern zone media in Melaka. — Bernama

PETALING JAYA: The appointment of the Malaysian Anti-Corruption Commission (MACC) chief may go through Parliament, requiring a two-thirds majority and any termination must go through a special tribunal.

Besides these changes – which have long been called for by non-government and civil groups – MACC is set to form its own service commission.

Talking to MelakaFM yesterday, MACC chief commissioner Datuk Seri Azam Baki said the government has agreed in principle to the proposal that the appointment of the MACC chief would go through Parliament.

“For the appointment of the MACC chief commissioner in future, if agreed, it will need a two-thirds majority and will have to go through a constitutional process,” he said.

Previously, non-governmental organisations and members of civil societies have called on the government to ensure the appointment or removal of the chief commissioner received maximum public scrutiny.

Azam also noted that the committee agreed to a suggestion that the termination of the commissioner must go through a special tribunal, and could not be terminated by the Yang di-Pertuan Agong based on the advice of the Prime Minister.

The Special Cabinet Committee agreed that MACC should form its own service commission, he said.

“At the moment, any hiring or dismissal of our officers is done by the Public Services Commission.

“Giving us the freedom to hire and dismiss our own officers and staff will be much better as it shows that we are independent and transparent in our act,” Azam said.

Azam said the proposals were among law reforms introduced for MACC listed under the National Anti-Corruption Plan (NACP) 2019-2023.

Azam noted that MACC was focusing its efforts on enforcement, among others, and to reduce leakage in government procurement.

Citing an example of the commission’s enforcement efforts, he said there was a case in Sabah where the Federal Government had allocated RM1.5bil for a water supply project.

“Based on our investigation, the project actually cost half the amount, and the other half had gone missing due to corruption.

“In that particular case, we arrested three senior government officers who are now on trial.

“We also seized cash amounting to about RM114mil. We found about RM53.3mil in cash at one of the officer’s houses.

“Such cases are disturbing, and personally to me as a law enforcer,” he said.

Azam said MACC has been transparent in all of its investigations and would reveal its findings to the public.

He also said that he would inform Minister in the Prime Minister’s Department, Datuk Takiyuddin Hassan, regarding the latest updates in order for the latter to answer questions in Parliament.

“We can say our approach is not only limited to law enforcement, but also to inform the public what we are doing,” he said, adding that more focus would be given to high profile cases involving leakage of government funds,” he said. 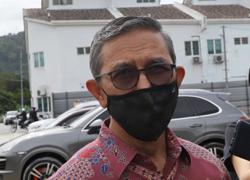