A composite image showing the monitor lizard and monkeys that have been allegedly shot with arrows.

KUALA LUMPUR: The police have urged witnesses to come forward as a report has been lodged about several viral videos on social media that appear to show animals shot with arrows.

Brickfields OCPD Asst Comm Zairulnizam Mohd Zainuddin @ Hilmi said they received a report on the incident at around 5.18pm on Monday (Aug 24).

"The complainant is an employee of the National Landscape Department who claimed to have received a screenshot and video at around 6.15pm on Saturday (Aug 22). In the video, a monkey can be seen with an arrow pierced into its tail," he said in a statement.

He said the complainant believes the incident occurred near the Arboretum Zon at Taman Persekutuan Bukit Kiara in Taman Tun Dr Ismail here.

"The complainant also claims to have received a picture of a monitor lizard with an arrow pierced in its torso, although the location of the incident could not be determined, ” said ACP Zairulnizam.

He added that the police have opened an investigation under Section 29(1)(e) of the Animal Welfare Act 2015 for causing unnecessary pain or suffering to any animal.

He said that the culprits could face not more than three years jail or a fine of no less than RM20,000 and not more than RM100,000 or both if found guilty.

ACP Zairulnizam said they viewed the matter seriously and urged anyone who witnessed the incident or has any information on the culprits involved to contact the police hotline at 03-8888 2010 or 03-2297 9222. 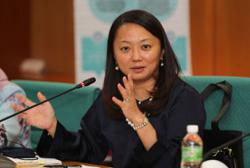