Due for a change: Anifah, speaking at a press conference, said Musa has done a good job for Sabah but it was time for him to step aside. — Bernama

The Parti Cinta Sabah (PCS) president said he valued greatly what Musa had done for the state but believes that times have changed.

“I think he has done a good job for Sabah but I feel it is time for him to give way for others to take over,” he said when asked if Musa would be accepted into his new political vehicle which he took over last month.

“Musa is my elder brother, I definitely love him but there are differences when it comes to politics, in Kuala Lumpur or Sabah.

“They contested the same seat,” said the former foreign minister.

Pairin and Jeffery contested for the Tambunan state seat in the 14th General Election.

The 69-year-old Musa is trying to stop the state election by challenging the Yang di-Pertua Negeri Tun Juhar Mahiruddin’s decision to dissolve the state assembly on July 30.

Speaking to reporters during a media luncheon with PCS leaders, Anifah said the re-branded PCS was looking at contesting enough seats in the upcoming state election to form the government.

“We will contest a sufficient number out of the 73 seats to form the next state government,” he said.

Anifah revealed that he had been contacted by several assemblymen who recently left the Warisan Plus camp to team up with Musa to topple the state government.

“We have not made any decision on it. We are not saying no.

“We respect their requests. We have to study it,” he said. 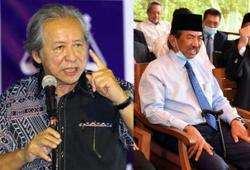