"Parti Warisan Sabah president Shafie should look in the mirror before condemning others for their decision to jump ship and side with his political opponents," PBS information chief Datuk Joniston Bangkuai said Monday (Aug 10).

He said that Warisan itself was made up of crossovers when Penampang MP Datuk Darell Leiking and Likas assemblyman Datuk Junz Wong crossed over from Sabah PKR and Sabah DAP respectively to join Warisan in 2016.

In fact, many of Shafie's followers in Warisan are made up of – using his own words – 'katak' (frog)," Joniston said in response to Shafie's assurance that candidates for the soon-to-be-held Sabah elections would be loyal.

Speaking in Lahad Datu on Sunday (Aug 9), Shafie told the people that it was time for Sabahan voters to teach party hoppers a lesson and end the unhealthy practice faced by the state time and time again.

Bangkuai said that both Darell and Wong were condemned by their respective parties, but these parties eventually worked with Warisan in the Opposition.

Bangkuai said that even Warisan took over the helm of the state government after the May 2018 state election, after Sabah Barisan Nasional partner party Upko left the coalition to support the Warisan government.

"Suddenly, when assemblymen decided to go against him, he condemned them as traitors, betraying the people's mandate. It seems that Shafie's definition of 'katak' is for people who do not support him, " Bangkuai argued.

Sixteen assemblymen aligned to Warisan Plus parties shifted loyalties to former chief minister Tan Sri Musa Aman who tried to topple Shafie on June 29. The move failed and ended in the dissolution of the 60 member state assembly on July 30. 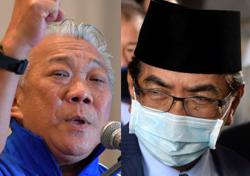