A SENIOR backbencher wants Finance Minister Tengku Datuk Seri Zafrul Aziz to correct an erroneous statement made by his predecessor in Parliament over the Goods and Services Tax (GST) refund.

“Will the ministry, through the Finance Minister, make a Minister’s Statement in Parliament to deny the accusations by Bagan (former finance minister Lim Guan Eng) that the previous government had robbed the RM19.4bil GST refund?” Datuk Seri Ahmad Maslan (BN-Pontian) said in Dewan Rakyat yesterday.

Ahmad noted that Treasury secretary-general Datuk Ahmad Badri Mohd Zahir and the Parliament Public Accounts Committee had since found that the GST refund money was not missing as alleged by Lim.

He made the request to Deputy Finance Minister Mohd Shahar Abdullah during Question Time.

However, Deputy Dewan Rakyat Speaker Datuk Seri Azalina Othmad Said reminded Ahmad to raise the matter with Tengku Zafrul when he winds up his ministerial replies.

There had been controversy over GST refunds when Lim brought the issue up in Dewan Rakyat in August 2018, claiming that the RM19.4bil GST refund was “robbed” by the previous Barisan Nasional administration. He told the House that the former government had not been able to refund firms their credit tax from GST because 93% of the money had not been placed in the correct account.

Last July, the then opposition lawmakers attempted to cite Lim to the Parliament’s Rights and Privileges Committee for misleading the House.

Meanwhile, Shahar said efforts were being made to return the GST claims to eligible applicants, which include speeding up the application process.

Shahar noted that claims for GST refunds had risen by an additional RM9bil, from the RM19.4bil which Lim mentioned two years ago.

He was answering a question raised by Datuk Amiruddin Hamzah (IND-Kubang Pasu) on whether the GST refund exercise had been completed. 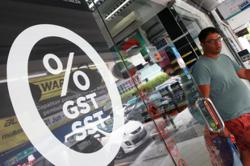