SIBU: The public here is showing a high level of compliance with the compulsory rule of wearing a face mask, with no one issued a compound during operations carried out by the integrated enforcement team on Saturday (Aug 1).

The enforcement teams were led by the police, Civil Defence Force, Rela and the army.

The operations were carried out in crowded public places which included the wet market, bus terminal and supermarkets around town.

The wearing of face masks became compulsory starting Saturday to curb the spread of Covid-19.

Sibu deputy OCPD Supt Collin Babat reported that the widespread publicity by the media resulted in the public abiding by the ruling.

"The level of compliance is very satisfactory as all traders and members of the public are putting on face masks.

"They are also observing physical distancing. People are well-informed on the need to wear face masks," he said.

Supt Collin said four enforcement teams would carry out daily monitoring at all crowded places in and around town.

"I urge everybody to put on face masks when they are in a crowded place and to observe physical distancing. This is for the good of everybody," he said.

He warned that they would not compromise with anyone who failed to comply with the SOP.

"We will issue compounds of RM1,000 under Rule 10 of the Prevention and Control of Infectious Diseases (Measures within Infected Local Areas) Regulations to anyone caught not wearing a mask," he said. Be strict but fair when ensuring public compliance with SOP 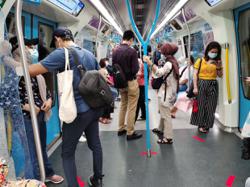