By Lee Chonghui and Sandhya Menon

Ready for a new day: Pupils were well prepared to attend classes after a long break, with many wearing masks and face shields.

KUALA LUMPUR: Face masks and even face shields are seemingly the norm at schools, even when there is no legal requirement for students to use them as Year One to Four pupils resumed lessons.

SJK (C) Kepong (1), which recorded an attendance of 92% yesterday, saw almost all of its 1,747 pupils wearing masks and shields, with headmaster Ngoi Kwang Hong saying pupils were “encouraged, but not forced” to do so.

The first day back saw pupils being educated on the dos and don’ts in school, the importance of wearing face masks, washing their hands with soap regularly and maintaining social distance.

“Teachers also did some revision. We did not want the pupils’ first day back to be filled with lessons. It would be too taxing, ” Ngoi said.

To avoid overcrowding after school, Year One pupils were dismissed first at 11.45am, followed by the subsequent years with a 15-minute gap between them.

Pupils waited for their ride in the school hall.

Transport operators wrote their number plates on a piece of cardboard, as commonly done at airport gates, and led pupils out in an orderly fashion. 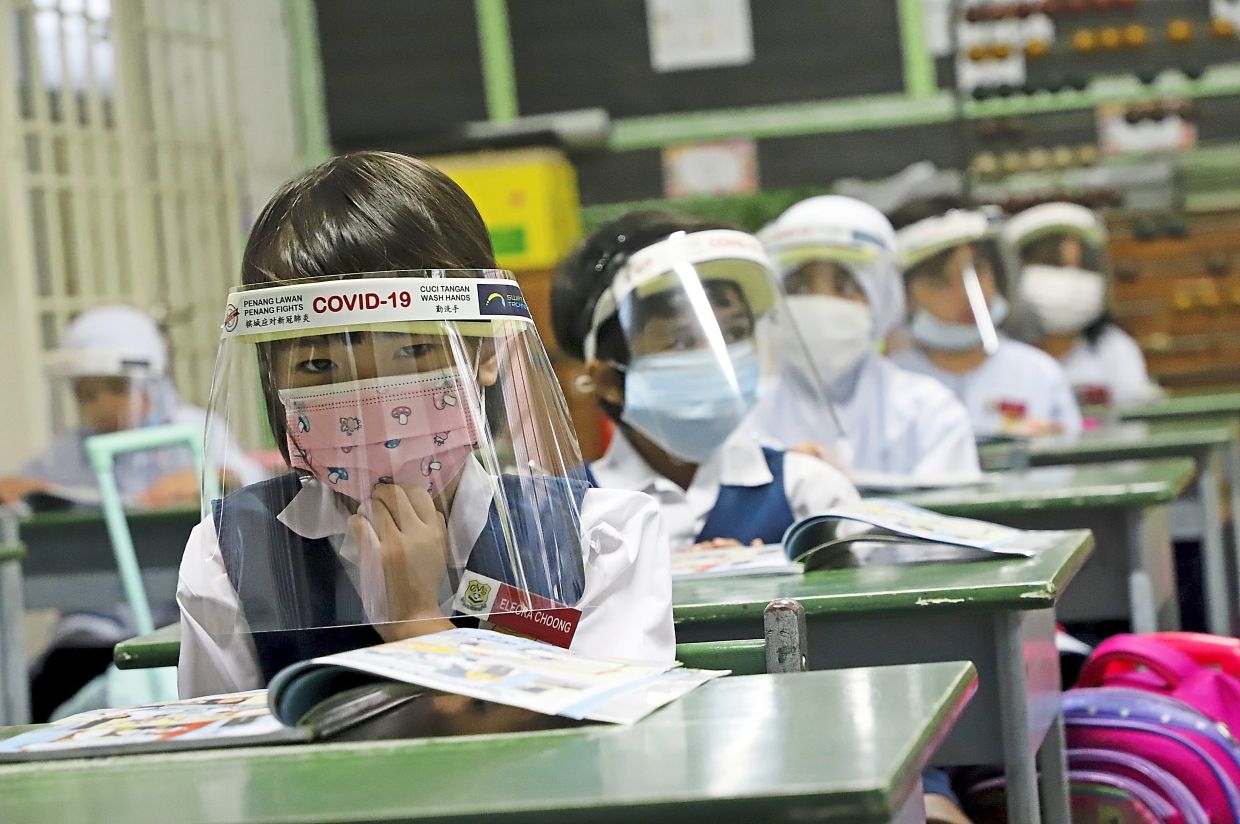 Despite separating the pupils according to how they would be picked up, some operators failed to inform the pupils of the new waiting area while parents who were unfamiliar with the school layout had trouble locating their children.

A parent, Fong Yit Meng, said his seven-year-old son Lucas reminded him about packing a face mask and hand sanitiser.

“When the MCO was implemented and he had to stop going to school, he knew something wasn’t right.

“So we taught him about Covid-19 and what he should do to prevent contracting the disease.

“Children are fast to understand things and they know hygiene is important. It’s crucial not to panic, ” he said.

National Union of the Teaching Profession (NUTP) secretary-general Harry Tan said primary pupils were happy to be back.

“They were all looking forward to seeing their teachers and friends.

“Despite their excitement, the SOP laid down by the Education Ministry and schools was strictly observed, ” he said, adding that teachers had to monitor pupils during recess.

“Teachers have become prefects, watching over pupils carefully and diligently, ” said Tan, who acknowledged that some parents were still not sending their children to school as they were still concerned about safety.

“From our observations, we found that the pupils were able to understand and follow the SOP with the help of teachers.

“We want to record our appreciation to teachers and parents for ensuring the pupils’ safety, health and comfort, ” he said on Facebook.

“Teachers were in control but it was chaotic when school ended as parents were crowding around the exits to pick up their children.

“Physical distancing was a challenge.

“Some parents were not even wearing masks, which made it worse, ” she said, urging schools to resolve the matter quickly.

Melaka Action Group for Parents in Education chairman Mak Chee Kin cautioned that the “good behaviour” might not last long.

“Everyone, including the media, has been monitoring the situation so everyone is on their best behaviour.

“Whether they have the resources, stamina, commitment and perseverance to continuously adhere to the SOP is another matter.

On a mission to ensure his schoolmates adhere to SOP