PETALING JAYA: The special task force on the Unified Examination Certificate (UEC) will be submitting its long-awaited report to the government next month.

“Aside from UEC, the report includes a review of all other education problems, offers recommendations to those problems and sheds light on grievances the public has towards the education system. We have also reviewed the terminology of ‘recognising’ UEC, ” he said.

He explained that besides looking into the UEC issue, the task force had to delve into other issues regarding education as well because “one question gives birth to another”.

“We urge the government to make the report accessible to the public, ” he told The Star yesterday.

He said the Education Ministry (MOE) had been “excellent” in providing tremendous support and technical knowledge regarding the matter to the task force.

Formed in October 2018, the UEC task force was assigned to study the recognition of UEC in the country.

The report was supposed to have been presented to the government earlier but the resignation of former education minister Dr Maszlee Malik, the emergence of an interim Education Minister (Tun Dr Mahathir Mohamad) and the change of government had delayed the submission.

Noting that no party should be faulted for the hold-up, Khoo said: “We need to present the document in a climate where people are rational and reasonable, rather than in a climate where interest groups are ‘fantasising’ about what the report is.”

“People should stop politicising and instrumentalising the UEC issue to create further anxiety surrounding the matter. Interested groups should also refrain from making statements that have no bearing on the matter, ” he said.

On Sunday, Prime Minister Tan Sri Muhyiddin Yassin clarified that he never said the government would recognise UEC during his recent meeting with leaders of the Federation of Chinese Associations Malaysia (Huazong).

According to a statement by the Prime Minister’s Office, Muhyiddin said UEC had gained partial recognition when the government previously accepted UEC holders for a teaching degree programme (PISMP) specialising in the Chinese language at Institut Pendidikan Guru Malaysia.

It said the government had in 2012 accepted UEC holders for the PISMP programme in Chinese language on condition that they passed Sijil Pelajaran Malaysia and obtained at least a credit in Bahasa Melayu.

“The Prime Minister also stressed that UEC should follow the National Education Policy if it is seeking a resolution to the matter by the government in the future, ” the statement said. 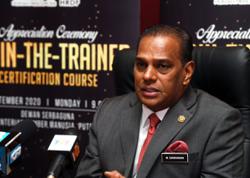