Promoting safety in the workplace

KUALA LUMPUR: Recent months have seen healthcare at the forefront in the fight against the Covid-19 pandemic, but worker safety and health is always a policy imperative, said Human Resources Minister Datuk Seri M. Saravanan at the launch of the Workplace Health Promotion Seminar 2020.

He added, “I am urging all employers to support and implement health promotion activities for their employees because every life is precious. A healthy workforce is an asset to the society and the country.”

“Workers are the key asset for any organisation in driving the business and improving the bottom line. Employers should take health promotion seriously, because studies have shown that every dollar spent on health promotion will result in about three dollars’ savings on medical expenses and the cost of absenteeism, ” said Socso chief executive officer Datuk Seri Dr Mohammed Azman Aziz Mohammed.

Moreover, growing workloads and responsibilities in today’s work environment have forced Malaysians to spend longer hours at work, raising the issue of employee health and wellbeing. This is especially so with the prevalence of risk factors for non-communicable diseases (NCDs) among workers in the country.

The National Health and Morbidity Survey 2019 revealed, for instance, that 9.4% of Malaysian adults are diabetics, 15.9% suffer from hypertension and 50.1% are overweight or obese. These findings tally with the leading causes of deaths in the country, namely cardiovascular diseases such as heart disease and stroke.

Socso data reflects the reality on the ground, with 2019 data showing that 22,591 among the 7.2 million workers insured under Socso were reported to be invalid due to NCDs. The number of claims for Soco’s Invalidity and Survivors’ Pension due to NCDs has also increased by more than 100% between 2010 and 2019.

In addition, findings of the Health Screening Programme (HSP), which was launched in 2013 to provide free health screening to eligible workers aged 40 years and above for early detection of NCDs, have also been alarming.

The programme has screened more than 570,000 thus far and found that 73% of screened employees were overweight, 27% had hypertension and 9% had diabetes, with about 61% found to have high blood cholesterol - all factors that could contribute to disability and deaths due to NCDs without intervention.

“NCDs have a profound economic impact beyond the personal suffering they cause. They place increased strain on the national health system, while businesses are faced with economic losses due to the workers’ reduced productivity, ” Saravanan said.

This is why programmes such as the Activ@Work Challenge are vital in placing prevention first, in line with the International Social Security Association’s Vision Zero initiative.

Mohammed Azman added, “One of the pillars of social security is prevention. Socso has been involved in preventive activities for more than a decade. We believe that prevention must be at the core of any social security programme.

“We must not accept any death and disability due to disease or injury as it is. We hope the emphasis on prevention will translate into the reduction of disability and deaths from NCDs.”

The Activ@Work Challenge is a collaboration with BookDoc aimed at being a catalyst for employers and employees to be physically active. From 132 participating employers when it was launched in 2017, the figure has grown to 237 employers in 2019, with participation of government sector employees. 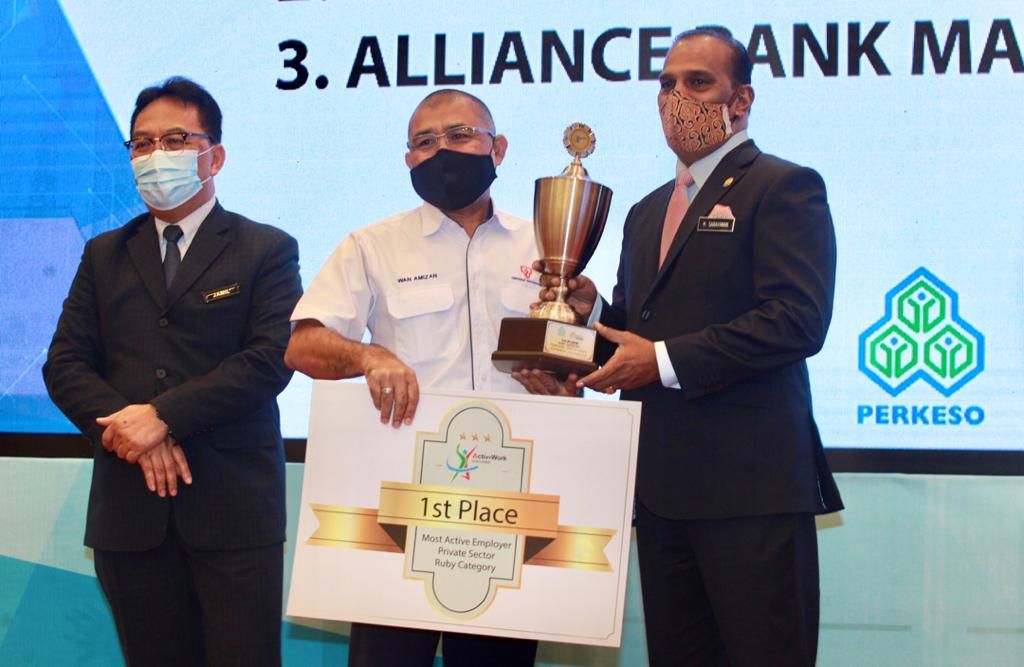 A Tenaga Nasional Bhd representative (centre) receives the first place award for the Most Active Employer (Private Sector) in the Ruby category from Saravanan (right) at the Activ@Work Challenge 2019 award ceremony, while Mohammed Azman looks on.

The Vision Zero initiative, which puts emphasis on the prevention of diseases and injuries through systematic intervention at the workplace, is to achieve zero morbidity resulting from NCDs and hardship from disability, through zero tolerance for high-risk behaviour.

Progress remains slow, with Vision Zero currently being practised by only 29 partners and 262 companies.

Saravanan opined, “What I really want to see is for more companies to practice Vision Zero. I think after almost four years, the number of participating employers is too low. We need every employer and employee to be committed and implement healthy lifestyles.

“Therefore, I’d like to call upon all employers to consider practising Vision Zero to reduce workplace injury and diseases.”