MIRI: The new normal of wearing a face mask and social distancing is to be enforced at all public-gathering venues in Miri.

As Sarawak battles to contain the second wave of Covid-19 infections, the Miri City Council is expanding the new-norm practices beyond buildings and complexes.

Mayor Adam Yii said the council is set to enforce the new norms as extensively as possible.

"The new norm of wearing a face mask, social distancing and personal hygiene measures will be given comprehensive coverage in Miri.

"These new norms will be implemented in all retail shops, shopping complexes, food-premises, markets and also all public gathering places.

"The city council has launched a social media programme on the new norms to make it known to as many people as possible.

"The public must get used to these new norms. They must play their part as we battle the Covid-19 infections," he said.

Yii on Tuesday launched a poster campaign on the new norms at the Kedayan native market in the city centre.

The council has already made wearing a face mask and social distancing mandatory in food-premises and shopping malls.

Yii however, was not happy with the level of compliance in the city of 350,000 people.

The council will use social communication platforms to widen its publicity outreach, he said.

Sarawak is battling a new wave of Covid-19 positive cases and a surge in the number of patients-under-investigations in the past week. 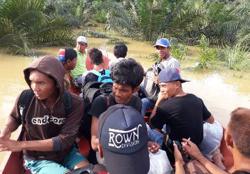 Covid-19: Everyone involved in campaigning must be vigilant, says Sabah MCA chief