College student charged with murder of her newborn

GEORGE TOWN: An 18-year-old college student was charged with the alleged murder of her newborn baby girl by tossing the baby out of her 13th floor apartment.

M. Santhiea was alleged to have killed the baby at 8.25am on July 10 at Sri Ivory Apartment, Bandar Baru in Ayer Itam.

She is charged under Section 302 of the Penal Code, which carries the death penalty upon conviction.

The charge was read out to Santhiea, who was warded at the Penang Hospital maternity ward, where she is receiving treatment and is being held in custody.

Magistrate Fadrina Khairi was present when the charge was read out at the hospital yesterday.

Rayer requested for Santhiea to be allowed bail despite the charge being a non-bailable offence.

“They said that the magistrate’s court does not have jurisdiction to grant bail.

“Under the law, even if you are charged with murder, the provisions make it clear that there are circumstances where bail can be awarded.

“We cited the recent case where the Federal Court last year had allowed Samirah Muzaffar, the wife of the late Cradle Fund chief executive officer Nazrin Hassan, to be released on a RM500,000 bail with two sureties pending her murder trial, ” he said.

Rayer said Santhiea had medical needs after giving birth to a child.

“I have asked the magistrate to refer the case to the High Court and she has agreed.

“We will wait for the decision, ” he said when met outside the maternity ward yesterday. DPP Yazid said the case will be referred to the High Court for clarification on the law for bail.

“She is under custody in the hospital as she still needs treatment, ” he said.

Earlier, Santhiea and her boyfriend were remanded for six days to assist in the investigation into the death of a newborn after the baby was thrown from an apartment.

The boyfriend also 18, was released from remand. 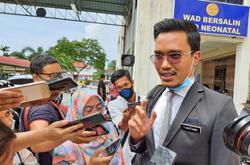