SHAH ALAM: A Nigerian was charged at the High Court here on Thursday (July 16) for the murder of a nursing sister last year.

Alowonle pleaded not guilty after the charge was read in English before judge Datuk Ab Karim Ab Rahman.

He was charged under Section 302 of the Penal Code, which comes with a mandatory death sentence.

Justice Ab Karim fixed Aug 13 for the case to be mentioned.

According to previous media reports, Siti Kharina, 40, was reported missing on May 8 and found dead with slash wounds to her chest, neck and head on May 15.

Initially, a 35-year-old Nigerian woman and a 38-year-old Pakistani man were also detained together with Alowonle but the duo was released on a bond of RM13,000 and RM11,000, respectively.

Siti Karina's remains were discovered after the condominium unit’s landlord saw blood flowing out from inside.

It had also been reported that the mother of three lived with her family in Negri Sembilan but also rented the condominium unit in Cyberjaya. 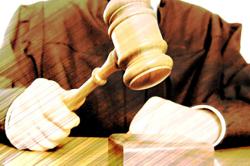