The Selangor Sultan said he had known the late Prof Khoo since the mid-80s and appreciated his contributions via his views and ideas in various fields, especially in local history.

"Tuanku is impressed with the spirit and efforts made by the late professor who always prioritised accurate historical facts in his research, although there are some parties who tried to twist historical facts," he said via a statement on the official facebook page of the Selangor Royal Office.

The national historian was part of the committee which drafted the Rukunegara, the five principles that charted Malaysia’s national philosophy in the wake of the 1969 riots.

During the royal audience, Rathi expressed her gratitude to the Selangor Ruler for giving his consent to rename a road in Selangor after her husband.

Sultan Sharafuddin, however, expressed displeasure over the perception of certain quarters for their narrow views regarding Khoo's contribution.

He said he was also puzzled that certain politicians made light of the importance of the country's racial history as highlighted by the late historian.

"The Selangor Ruler also hopes that the contributions and services of the late historian like Prof Khoo will be remembered by all Malaysians regardless of their race and background," said the statement.

This includes his efforts to revive the spirit of loving the nation's history among the youth and the development of local sports arenas especially football. 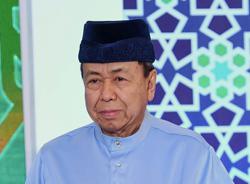