PUTRAJAYA: The government has hit out at the Al Jazeera news channel for airing what it claims is false news about Malaysia.Senior Minister Datuk Seri Ismail Sabri Yaakob said as an international news network, Al Jazeera was expected to have high ethics.

Referring to its programme 101 East aired on July 3 which accused the Malaysian government of arresting illegal immigrants using public health and safety concerns, he also called the report “irresponsible”.

“Unfortunately, the report was void of facts and full of baseless accusations. It was done in bad faith.

They must apologise to Malaysians for airing false news on our country.

“I also challenge them to name me a country which gives freedom to an illegal immigrant to be in the country.

As far as I know, there is none.“Immigration laws in most countries are the same as ours.

Maybe they know which country allows such freedom, ” he said when commenting on the report, titled Locked up in Malaysia’s Lockdown, during his televised press briefing yesterday.

He said 4,924 undocumented foreigners placed at four immigration detention depots were screened for Covid-19, adding that 777 of them tested positive and were quarantined at the Malaysia Agro Exposition Park Serdang.

“Although they are in our country illegally, we don’t just let them be and get sick and infected. We treat them until they get better, just like what we do to our citizens, ” he said.

On claims that the authorities had unfairly locked up foreigners during the pandemic, Ismail Sabri said this occurred in areas where the enhanced movement control order was enforced.

“In this situation, we do not allow movements and it is not just among the illegals, but also those with valid documents and locals.

“This is done to prevent the spread of Covid-19.

“We have a similar lockdown affecting several villages in Hulu Langat and at tahfiz, ” he added. 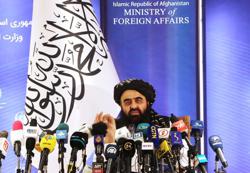