BACHOK (Bernama): The body of another victim from the capsized boat incident on Monday (June 29) has been recovered about 32.7 nautical miles north of Pulau Perhentian, Terengganu.

Kelantan Malaysian Maritime Enforcement Agency (MMEA) director Capt Muhd Nur Syam Asmawie Yaacob said the body believed to be of Che Wadi Bakar, 44, the seventh casualty and third of four missing persons in the tragedy, was found by fishermen before being reported to the search and rescue (SAR) team.

"The body was brought to the SAR operations centre at the fishing jetty in Kuala Kemasin at 12.22pm Sunday (July 5)," he said when met here.

Muhd Nur Syam, who is also the operations commander, said the body would be taken to the Raja Perempuan Zainab II Hospital in Kota Bharu for a post-mortem and DNA test to confirm the victim’s identity.

"The family could only recognise the clothes the victim was wearing, namely a blue shirt and shorts, but could not exactly identify the victim as the body’s physical appearance had changed.

"The SAR team will continue operations to trace the last (missing) victim," he said.

In the 8pm incident on Monday, a boat carrying 20 anglers including the skipper capsized after it was hit by big waves in a storm. Twelve of the victims, aged 18 to 60, survived. - Bernama 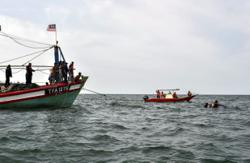