PETALING JAYA: Malaysia is taking a firm stance against human trafficking and illegal border-crossings and its policies should not be in the direction of enabling traffickers, says MCA International Communication and Diplomacy bureau chairman Dr Tee Ching Seng (pic).

He said there was a need to understand that Malaysia had already pulled out all the stops to assist refugees in the Rohingya crisis and the country was unable to shoulder the colossal burden alone.

“May we suggest that you, the critics, employ a more constructive approach, and share our burden by taking in 200,000 Rohingya refugees, ” he said in a statement yesterday.

On Friday, Prime Minister Tan Sri Muhyiddin Yassin said that Asean must find an effective solution for the Rakhine state crisis as Malaysia could no longer accept refugees as its resources and capacity were already stretched.

Muhyiddin called on the United Nations High Commissioner for Refugees (UNHCR) to work closely with the grouping to expedite the resettlement process of UNHCR cardholders to third countries as the spillover effects of the crisis continue to impact the region.

Tee said due to the Covid-19 outbreak, the Prime Minister’s first priority was to address Malaysia’s own dwindling resources and mitigating the resulting economic impact.

He also concurred with the Prime Minister’s call for the UNHCR to expedite the resettlement process of Rohingya refugees to third countries with advanced economies which can accommodate the refugees better.

“Moreover, other than human trafficking and illegal entries, we should not ignore the possibility of terrorists masquerading as refugees to gain access into our borders.

“These terror cells often do their recruitment among other refugees and it poses a threat to our national security, ” said Tee.

Muhyiddin had said that Malaysia was unfairly expected to do more to accommodate incoming refugees.

“Despite Malaysia not being party to the 1951 Refugee Convention and the 1967 Protocol Relating to the Status of Refugees, we have provided humanitarian assistance to the Rohingya refugees and other refugees from Myanmar.

“But this situation cannot continue forever, ” he said during the 36th Asean Summit, which was held virtually for the first time across

10 cities in the region due to the Covid-19 pandemic. 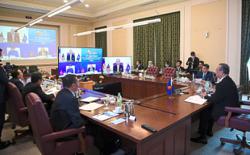 Muhyiddin calls for end to Rakhine crisis with durable results The Strange Life of Salim the Refugee: Part 3