GEORGE TOWN: The 39-year-old doctor from Penang Hospital who allegedly broke into several homes at the Gurney Park condominium in Jalan Kelawei has been charged with 11 counts of being in possession of stolen goods.

The charges against Neoh Soon Khai were read out at two separate Magistrate's Courts here, among them for being in possession of two stolen identity cards and a passport belonging to Wong Wei Ye and Ong Chong Chow Jonathan which were found at his condominium at Gurney Park in Kelawei Road on April 23 and 24.

The charge under Section 411 of the Penal Code for dishonestly receiving stolen property carries a five-year jail term or a fine upon conviction.

In submissions before the court, Neoh's lawyer K. Mahendran told Magistrate Jamaliah Abd Manap that his client was a psychiatric patient who suffered from bipolar disorder and submitted a doctor's letter from the Bukit Mertajam Hospital as proof.

Mahendran also asked that Neoh be examined by a psychiatrist to confirm his mental fitness to stand trial.

Jamaliah then ordered Neoh to be sent to Hospital Bahagia Ulu Kinta in Perak for a month for psychiatric evaluation and then set July 29 for case mention.

No plea was recorded from Neoh.

At a separate court, the remaining charges against Neoh were read out before magistrate Rosnee Abd Radzuan.

DPP Mohammad Syafiq Nasrullah Saleem Ali who prosecuted told reporters that the 11 charges were made under Rule 25(1)(o) of the National Registration Regulations 1990 for possession of another person's MyKad.

On April 23, a team of policemen picked up Neoh to assist investigations into a series of break-ins at the condominium.

It was reported that the losses incurred by the victims were estimated at RM493,615 and that the police believe 22 break-in cases since 2014 were related. 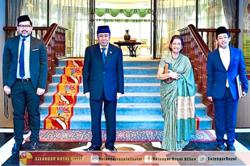