PAS secretary-general Datuk Takiyuddin Hassan (pic) said the motion acts as a show of support and trust for Muhyiddin’s leadership, adding that the Prime Minister had put the people first while showing utmost concern for their wellbeing since taking the reins of the nation's administration in March.

"PAS is confident with the excellent delivery, and with the backing and commitment shown by the government machinery, whether at the federal level as well as many of the state governments, the Prime Minister’s leadership will continue to be supported and praised by the people of all races,” he said in a statement on Friday (June 26) night.

Takiyuddin said the government’s economic stimulus packages, too, had been well received by all sectors headed in the same direction to ensure the nation’s economic recovery.

He said PAS was extremely confident the motion of confidence will be supported by a majority of the MPs, adding that the backing given will ensure stability in the country and prosperity of the people. - Bernama Suggestions for alternatives to be tabled soon 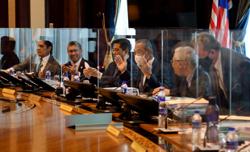