MIRI: The districts of Sri Aman and Betong in southern Sarawak are seeing increasing floods due to heavy rain.

Sarawak Fire and Rescue Department said in its latest update Friday (June 19) that rescue personnel had been deployed to the affected villages in the two districts.

About 135 people are seeing floodwaters of about 1m inundating their homes. Some 32 villagers in Kampung Bungin have moved out from their flooded houses to safer ground.

Betong is experiencing the third consecutive day of floods.

"The soil at the back of the longhouse has been swept away. Residents have been warned to be on alert if the erosion worsens," said the units.

Since June 17, heavy rains have brought floods into villages and caused hillslope erosion and a bridge collapse in Betong district.

Two days ago, some 650 people in five villages were hit by flash floods of about 0.8m.

A bridge collapsed near Rumah Ulu Rimbas longhouse after being swept away by strong river currents. Meanwhile, along Bukit Saban there was an area affected by hillslope erosion.

The bridge collapse has cut off Rumah Ulu Rimbas as there are no other land access.

The relevant agencies have been alerted and are repairing the damaged portion of the bridge.

The weather is still cloudy and some roads in the district are still inundated. 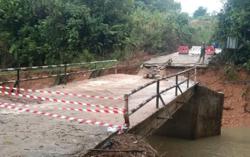 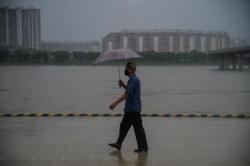