All set for EPL live action

GRAB a drink and get comfy on your sofa because the many nights ahead will be filled with live football action. The English Premier League is back, with Aston Villa facing off high-flying Sheffield United in the first match of the restart at 1am on June 18 (live on Astro SuperSport HD CH811 / SD CH831).

At a time when people are in need of some hope and joy, the return of the hugely popular league will surely put the smile back on many faces. Just tune in to Astro SuperSport or stream on the Astro GO app, where all the remaining matches of the league will be aired live.

The icing on the cake follows with the matches involving Liverpool, who are eagerly waiting to pop the champagne. They are shoo-in for the coveted title with only two wins needed but, there are still plenty of oohs and aahs to be expected as the race for Europe picks up steam elsewhere.

What makes the European race interesting is the fact that City, now in second place, may not be even part of the continental competition.

The Emirati-backed club are banned from the Champions League for the next two seasons by UEFA and fined £25mil for their shenanigans in seriously misleading European football's governing body and breaking financial fair play rules.

If they fail to overturn the ban, any club in fifth place will be good enough for a Champions League place, and this means several clubs are in the running for a spot in the premier competition.

The likes of Leicester City (53 points), Chelsea (48), Manchester United (45), Wolves (43), Sheffield United (43), Tottenham Hotspur (41) and Arsenal (40) are in a mighty battle for European spots, and the next nine or 10 matches will be fiercely contested by all the teams in the reckoning. 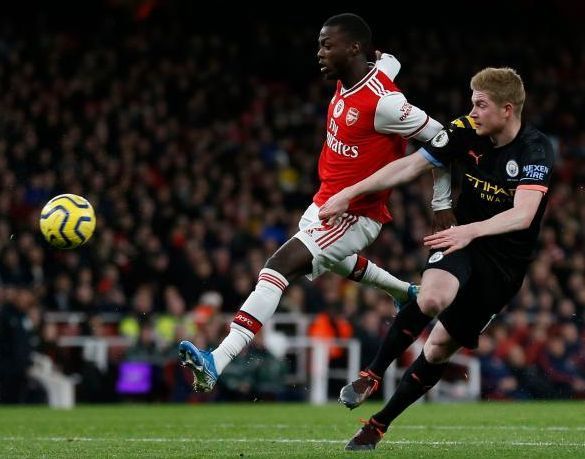 Arsenal’s Nicolas Pepe (left) vying with Manchester City's Kevin De Bruyne during their EPL match at the Emirates Stadium in London on Dec 15, 2019. The two teams meet again when EPL resumes, with the match shown live on Astro SuperSport on June 18, 3.15am

A win against City on day one of the restart would give Arsenal hope that they can finish at least fourth in the league. Before the league was halted, Mikel Arteta's side were in good stead as they went eight games without defeat, winning their last three.

Let's not forget the match between Tottenham Hotspur and Manchester United on June 20 (3.15am) which will be important for either side in their quest for a European spot.

The Red Devils, too, were on fire before the suspension as they went 11 matches unbeaten in all competitions. Manager Ole Gunnar Solksjaer will surely hope that the streak would continue and the return of striker Marcus Rashford and enigmatic midfielder Paul Pogba will only make him more confident.

Of course, Tottenham's manager Jose Mourinho stands in the way. He would want to prove a point by dethroning his former employers from the European race.

Is he capable of doing so? With the return of top marksman Harry Kane, his usual self-confidence could well go a few notches higher.

Sheffield United’s fairytale return will be put to the test when they face Chelsea on July 11, but Chris Wilder's side will know that they have to conjure up some results before they face the South London boys.

While Chelsea fans are eagerly awaiting the arrival of speed merchant Timo Werner, they will hope that the players ignore the tabloids and get on with the game as Frank Lampard looks to steer his side to Europe, and even go for a top-three finish if Leicester or City fumble.

As for Wolves, they have an easier run-in as they face sides like West Ham, Bournemouth and Aston Villa in the first three matches, and winning those three would mean that Nuno Espirito Santo's team would put them in with a chance for the Champions League.

No football fan would want to miss all these action as live sports has been absent for two months, which led to Astro offering free preview of all its channels during the MCO and CMCO periods, and a RM20/month rebate in June and July to all its loyal full sports pack customers.

“Boy are we glad that EPL is back. We feared that EPL would be called off, like the leagues in Holland and France which were cancelled without winners,” said football fan Henry Goh.

“After enjoying the preview channels, we are glad Sports Pack customers are getting rebate too.

“Now that the games are back on, can’t wait to wrap up the season. Weekends are just not the same without football on Astro,” he said.

With the La Liga and PGA Tour having returned, more live sports are set to resume this month including Serie A and the FA Cup, with Formula 1 and NBA coming in July. For the latest sports fixtures, tune in to StadiumAstro.com.

For now, fans are surely in the mood for some spice in the Premier League!