GEORGE TOWN: Eight people, including a factory bus driver, were injured after the bus they were travelling in skidded and crashed into five cars that were parked at a road side in Tingkat Paya Terubong on Thursday (June 4).

"When the accident occurred, the factory bus carrying passengers was on its way to Jalan Paya Terubong from Lagenda Heights.

"Upon reaching Tingkat Paya Terubong, the bus was said to have experienced break malfunction, which has resulted in the driver losing control during the incident.

"The bus hit a concrete wall at the left side of the road and skidded back to the right of the road, before it crashed into five cars that were parked at the roadside," he said in a statement on Thursday.

ACP Soffian said the crash had caused all five cars and the bus to be mangled and destroyed.

The case has been investigated under Section 43(1) of the Road Transport Act 1987. 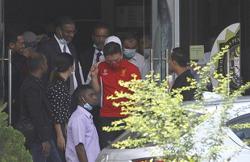