In a Facebook post, Dr Mahathir said he was at the party headquarters, waiting in his office.

Dr Mahathir and four other Bersatu MPs lost their party memberships following their move to join the Opposition bench during the Dewan Rakyat meeting on May 18.

Speculation on Dr Mahathir’s sacking has been rife in recent days as the first Bersatu party polls loom.

On May 18, Dr Mahathir had led the four MPs to sit with the Opposition bloc, as opposed to with Perikatan Nasional MPs, in protest of Bersatu having joined hands with former rival MPs to form the Perikatan government.

Muhyiddin and Dr Mahathir had fallen out after the former succeeded him as the eighth Prime Minister when the latter resigned as the seventh prime minister. 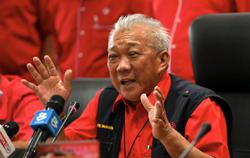