HULU SELANGOR: Five people were injured after the driver of a pickup truck ran amok and drove wildly, knocking into bystanders at a parking lot Bukit Sentosa where food stalls had been set up.

A 32-year-old man was arrested soon after.

Fortunately, the incident on Friday (May 22) saw no fatalities.

District police chief Supt Arshad Kamaruddin said the rampage took place following an earlier incident when somebody knocked the side mirror of the suspect's pickup truck for honking at a roadblock near Jalan Besar Bukit Sentosa.

This apparently ticked him off.

A 44-second video of the incident shared on social media shows the car being driven erratically in circles in the parking lot where food stalls had been set up.

The car was also seen crashing into a stall.

Shouts were heard throughout the video.

Another video, shot from a different angle, shows numerous bystanders attempting to stop the vehicle.

“Following the incident, five members of the public were found to have been injured. The victims, aged between 40 and 50 are in a stable condition.

“As of now, we can confirm two cars, two motorcycles and two tents were damaged.

"Five reports have been made so far, ” he said in a statement. 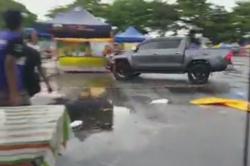