TAN Sri Mohamad Ariff Md Yusof (pic) may have vast experience in law as the former Court of Appeal judge, yet nothing could have prepared him for the political drama when he assumed the post of Dewan Rakyat Speaker.

Considered a soft-spoken judge, he is nevertheless seen as firm, impartial and independent in his role as Speaker on matters of the House. In an unexpected move, Mohamad Ariff has accepted a motion from Tun Dr Mahathir Mohamad seeking to move a vote of no confidence against Prime Minister Tan Sri Muhyiddin Yassin in Dewan Rakyat.

However, analysts agree that there is very little chance for the motion to come up during the one-day sitting on Monday as in the past, government’s affairs have taken precedence.

To reiterate this point, Mohamad Ariff issued a statement that the meeting – the first session of the year – would only feature the opening address by the Yang di-Pertuan Agong and that there would not be any other government business to attend to for that day.

“I received a letter signed by the Prime Minister who is the Ketua Majlis, informing that as the Covid-19 outbreak has not completely subsided, the government decided that the first meeting of the third session of the 14th Parliament would only take place for a day on May 18.

“There will be no meeting after the Yang di-Pertuan Agong’s opening address,” he said.

Initially, a few matters were already set for the one-day meeting, including the supposed declaration of the Opposition Leader’s appointment and the tabling of two Supplementary Supply Bills – much of it related to the Covid-19 fiscal stimulus package.

With Mohamad Ariff’s statement, this pretty much put paid to those looking forward to see whether the no-confidence motion would come up.

But this does not mean there will not be any other development taking place besides the King’s speech.

When the meeting convenes on Monday, 113 lawmakers will be sitting on the ruling coalition’s side while 107 MPs will be on the opposite bench, making it one of the largest Opposition bloc in the country’s history.

There are also two Independent MPs.

For the first time, lawmakers from a party in the ruling coalition – Parti Pribumi Bersatu Malaysia – will sit on both sides of the bench following a split in leadership.

This will also be the first time that Dr Mahathir – the country’s fourth and seventh prime minister – will sit on the Opposition bench in his 70-year political career while former prime minister Datuk Seri Najib Razak in the government’s bench.

Universiti Putra Malaysia’s political analyst Prof Dr Jayum Jawan said bringing up the no-confidence motion was to be expected from the Opposition.

He argued that while the King had the power and prerogative under the Federal Constitution to appoint the prime minister and his decision should not be subjected to any dispute, the parliamentary process might demand that this majority support be proven in the House.

He said based on calculations, the Perikatan Nasional government led by Muhyiddin had the majority – as slim as this might be – so he was not expected to be challenged on Monday.

“The Prime Minister himself may also want to call the vote to show that he has the majority and therefore put to rest this leadership distraction.”

According to the Parliament’s Standing Orders, such a motion must first be tabled in Dewan Rakyat and the agenda determined by the Minister in the Prime Minister’s Department in charge of parliamentary affairs, Datuk Takiyuddin Hassan.

If and when such a motion is included into the Parliament’s Order Paper, members of the 222-seat Parliament present during the debate – again, if at all it comes up for debate – will cast their votes.

This is similar to the Private Members Bill to amend the Syariah Courts (Criminal Jurisdiction) Act 1965 – also known as RUU355 – which was tabled by PAS president Datuk Seri Abdul Hadi Awang and allowed in the Dewan but never got the chance to be debated.

“If the House has only a one-day meeting, there will be slim chance (for the no-confidence motion).

“But we cannot be sure ... the Speaker may decide otherwise,” she said. 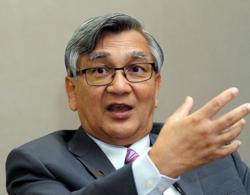 The position of the Speaker of the House in Malaysian democracy