He said he brought the matter up at a recent meeting, where they also exchanged views on the gig economy and the welfare of workers during the movement control order (MCO).

“Restaurant operators or merchants were being imposed a commission rate of between 20% and 32%.

“I told the companies not to charge such a high rate, ” he said.

The MCA president said this when he appeared as a guest on the Hello-Hello Segment hosted on Facebook Live by Umno president Datuk Seri Dr Ahmad Zahid Hamidi on Thursday (May 7).

He said the companies explained that they imposed such rates in order to give some of the fees back to their delivery partners.

“In my view, we have to look into the validity of their reason.

“And because the government is now in the process of strengthening the gig economy, we will look into the matter.

“Many people have complained and we need to pay attention so that the commission charged on restaurant operators who need to use the apps as platforms would not be too high, ” he said.

Dr Wee, who was also quizzed by Zahid on measures to curb drunk driving, said the Transport Ministry was in the process of reviewing the Road Transport Act 1987.

He said existing laws did not provide sufficient punishment for drunk drivers as under Section 45(1) (a) of the Act, a driver with blood alcohol content (BAC) of more than 0.08% would be fined between RM1,000 and RM6,000 or jailed up to 12 months.

Those who caused death due to driving in a drunken state could be jailed up to 10 years and fined up to RM20,000.

“We can see that it has not been effective in deterring people from driving while drunk, so it is time for the Transport Minister to discuss with the Attorney General’s Chambers, ” he said.

On the Rapid Transit System (RTS) Link project, he said both Malaysia and Singapore were set to finalise their agreements for the RM3.16bil project on July 31.

“As a whole, we will be prioritising public transportation projects that will benefit all Malaysians, especially the B40 group, ” he said. 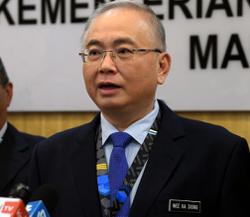 Wee: Education is the key